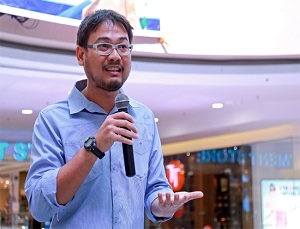 Filipinos are noted not only for their warm hospitality, strong family ties, hardwork, and dedication but also for their first-class skills and talents. While in the past, some Filipinos have been making waves in the international scene for their expertise and ingenuity in sports, music, and film, this time, they are creating headlines in another entertainment genre, particularly in the world of gaming.

Speaking of gaming, Elson NielDagondon is a Pinoy entrepreneur and software engineer, who is best-known for his ingenuity and excellence in creating games.He is more popularly known as the founder and president of Anino Games, the Philippines’ first and largest game development company. He is a world-class and multi-awarded computer game designer for various gaming platforms and entertainment giants.

Dagondon started to fulfill his childhood dream of running a computer gaming company while he was still a computer engineering student at the De La Salle University. Having the desire to earn a living out of his passion for games, this young brilliant Filipino entrepreneur established his first game development business venture in 2001 by founding Anino Games.

Besides being the mastermind behind the country’s largest third-party game development company,NielDagondon is,likewise, president and Board member of CIIT, the premier and fastest-growing Information and Communication Technology school in the Philippines.CIIT is a proud member of the Cosmopoint Education Group from Kuala Lumpur, Malaysia and Game Developer’s Association of the Philippines that brings topnotch affordable ICT education to the Filipino people. In collaboration with Anino Games, the school aims to produce graduates that will be globally recognized as highly competent practitioners in their respective fields and industries.

Utilizing the money he earned from a post-production he established while in La Salle, Dagondon founded Anino Gamesin 2001.Anino is the Filipino word for “shadow.’

Over the years,the company has consistently produced quality games and gained various acknowledgments and awards. Among the award-winning original IPs of Anino Games include the following:

Apart from the award-winning original IPs, Anino Games has successfully designed other games and products:

Despicable Me Game. A popular game for Apple’s iPhones, iPads, and Ipods is adapted from the Hollywood film animation Despicable Me.

NielDagondon truly represented the innovative ingenuity of the Filipinos to the world and inspired many young Filipino minds to make a difference and achieve greater goals. He knows that the Philippines will eventually gain reputation as a prominent destination for creative services, given the creativity, originality, and talent that are innate in every Filipino.