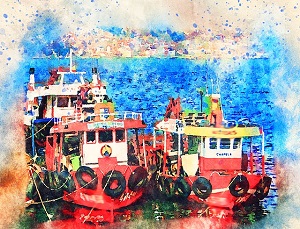 Philippine Fantasy in the Eyes of High School Students

Last Saturday, 1 March 2014, close to 200 hundred students, teachers, and parents gathered at the Circle Events Place to join CIIT’s Phantasya IV: An Arts Competition Unlike No Other, and witness the winners.

On its fourth year, CIIT College of Arts and Technology conducted its annual art competition in traditional and digital arts. Held

simultaneously, the traditional arts category was held at Circle Events Place while the digital arts was held at CIIT campus.

Judges, organizers, and audience were amazed and captivated with the students’ art works. Each artwork, either traditionally or digitally done, showed how these students interpreted ghosts and other folklore creatures, and the horror or fantasy these characters bring to their young minds. Their hand dexterity showed how well they could maximize different coloring media or use pen tablet with ease.

Well-known artists like Mannix Abrera, author of Kikomachine Comics, composed the judging committee and declared the following students as winners:

Dong-A, one of the major sponsors, was captivated with one artwork that they decided to award the Special Choice Award to Joseph P. Tandiman of St. Michael’s College of Laguna. Dong-A also awarded 6 consolation prizes.

St. Jude Catholic School got the highest total scores of participants thus they were named as the School of The Year and received a brand new laptop.

Aside from Dong-A, other sponsors include media partners Adobo Magazine and wheninmanila.com, and Vector X Vexel Philippines.

In his speech, CIIT President Niel S. Dagondon expressed his amazement and appreciation to all participants and announced the pilot classes for Grade 11 under the ICT track for the SY 2014-15.

During the event, CIIT also announced the mechanics in voting for the People’s Choice Award which will be given to the participant who garnered the most number of unique likes on CIIT’s Facebook page in a 2-week period. The winner will receive an iPad Mini after tallying the votes on Wednesday, 19 March 2014. And after receiving more than a thousand likes on Facebook, James Niel C. Tucay of Espiritu Santo Parochial School won the People’s Choice Award.

Admission’s Director Sherwin O, expressed his excitement to welcoming all the contestants who have enrolled in CIIT and pursue their careers in Multimedia Arts. All those who still have not enrolled in CIIT are entitled to a 40% Discount on Tuition Fees. “We hope that you guys take this huge opportunity only from the country’s best Digital Arts and Technology College!” he said.