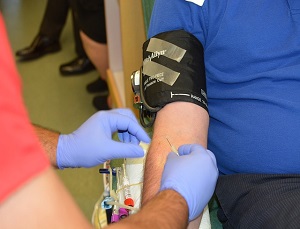 CIIT Professor Helps You Get Blood When You Need It

Plato was right when he said that necessity is the mother of invention. This is quite true for Mr. Joel Barquez, one of our CIIT instructors, whose Blood Donors Network app was recognized in the recently concluded Apps for Asia event organized by ADB and Microsoft.

remedy just that. Along with his team at the Social Innovations Camp Asia held in Kuala Lumpur last year, he was able to come up with plans for “Blood Donors Network,” which earned his team second place in the said event.

Blood Donors Network is a crowd-sourced web and mobile platform for the Red Cross, hospitals, blood donors, and recipients that aids communities to meet their blood donation needs. It helps increase the acquisition of new blood donors, maintain existing donors, and collect comprehensive data on donors. The donors would be recognized among the blood donors community and health organizations and agencies nationwide by awarding them “hero badges,” free annual physical examinations, 20 to 30 percent discounts in fitness and health centers, as well as with other incentives.

As if being recognized by SI Camp Asia was not enough, Mr. Barquez’s project would eventually become recognized by two of the biggest organizations in the world: Microsoft and Asian Development Bank.

The Apps for Asia Redesigning Development Program is a joint effort between Asian Development Bank and Microsoft that is backed up by regional IT Associations, private sector technology partners, and universities. This program encourages all software developers to come up with solutions for issues concerning NGOs, citizens, and enterprises in the region.

The program was composed of national developer events in different parts of Asia where hundreds of innovative app solutions were submitted. It commenced with an exhibit of the top entries in the annual ADB Annual Board of Governors meeting in New Delhi, India last May 2-5. Fortunately, the Blood Donors Network app was chosen as one of the top entries of the Philippines and was exhibited along with entries from other countries.

It is an honor to have someone like Mr. Barquez as part of the CIIT – Philippine College of Arts and Technology faculty. It only proves that our instructors are not only involved in shaping students, but they are also capable of making an impact on a more global scale. Apart from front lining multimedia and digital art, CIIT is also seeking to become a reputable IT school.

Screen Capture of the app and its home screen