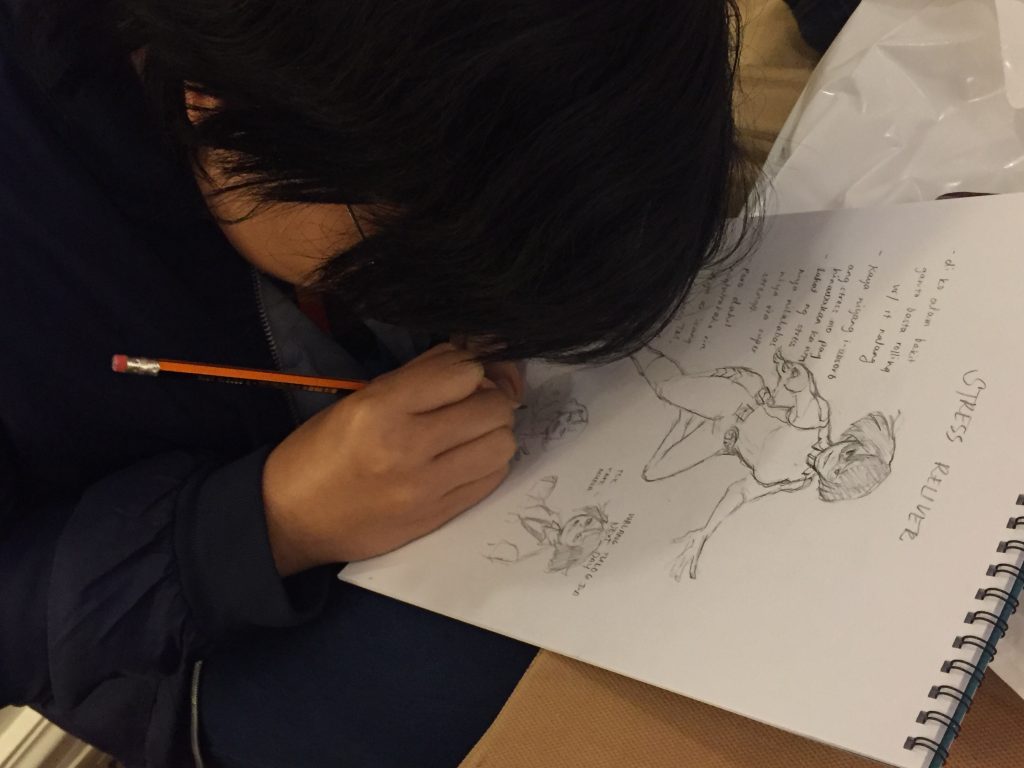 “I really did not expect to win anything,” said April Sanico after bagging the top award in the on-the-spot drawing competition during Huion’s Launch Party at the EDSA Shangri-La Mall last November 13, 2018. April received a Huion Inspiroy H604P tablet from Ynzal Marketing as her prize for the said competition.

April Angelie F. Sanico is a 2nd-year student of Bachelor of Science in Entertainment and Multimedia Computing (BS EMC), Major in Digital Animation at CIIT College of Arts and Technology. April’s deep interest in animation began after becoming fascinated with the animated shows Dexter’s Lab and the Powerpuff Girls. In High School, she started to dream of working in an animation studio especially after seeing some artworks published on DeviantArt. Unfortunately, it took her over five years before finally setting off on her journey of becoming an animator.

Most of you may be asking, “Why five years?”. We had a short chat with April to learn more about her story and journey to becoming an accomplished CIITzen. 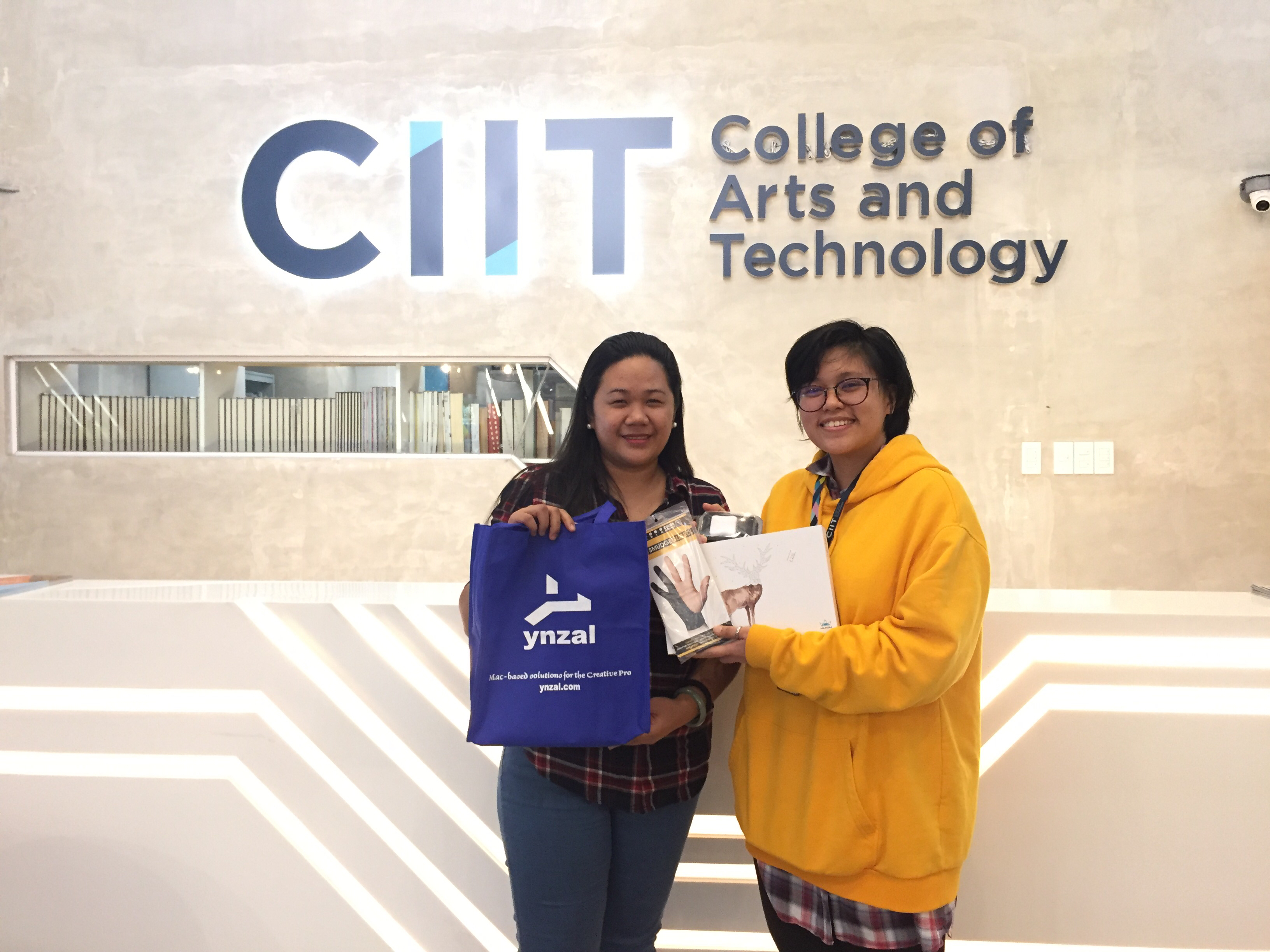 How did you get into art?

It actually started with Craig McCracken and Genndy Tartakovsky. My interest was captured by the 2D animation of their creations, Dexter’s Lab and the Powerpuff Girls. Since I grew up watching these 90’s cartoons, I began to enjoy sketching 2D animation characters ever since I was a child.

When did you start considering art as a future career?

Honestly, drawing was just a habit when I was younger. I never considered animation as a job. But in high school, after discovering other artist’s portfolio through the website DeviantArt, I began to imagine myself becoming part of the Animation industry.

When creating artwork, what is your purpose or motivation?

Actually, I think of myself as a person who’s not into animation that much, but I love visuals and stories. I think animation captured my interest not because of the visuals alone but because of the opportunity to express the stories in my head through visuals. I am looking forward to doing more storyboarding than character designing. I’d like to depict fun in a creative and analytical way. I have always dreamed to bring characters into life while also telling a story.

Let’s talk about your school life, what made you decide to finally obtain a degree in the Arts after receiving one in the field of Science?

Right after graduation from UP, I felt lost because my batchmates were applying to Masters degrees and taking medical school examinations here and there. I didn’t know what to do with my life, but then I was reminded of my passion for visual storytelling and my dream back in High School to be in the Animation industry, particularly to work in an animation studio abroad. That idea created a spark in my head to finally pursue animation. I did some research and found CIIT College of Arts and Technology. Initially, my parents did not approve of my plan, but later I convinced them to support my decision and my dream to work in an animation studio.

Let’s talk about the competition. How did you get to participate in it?

A classmate of mine and I were invited by one of our instructors during the Huion Launch Party. We were not expecting anything since we practically tagged along to simply witness the event. Surprisingly, during the program, one of the staff asked me to join the on-the-spot drawing contest. At first, I didn’t have any intention of joining but later I decided to finally go for it as an addition to my learning experiences as an aspiring artist.

How was the experience of joining an on-the-spot competition?

That moment was surreal because I came to know that the participants are veterans from the animation industry, animation students from other schools, comic artists, experienced animators from well-known studios and such. Honestly, it was quite intimidating to be surrounded by those folks. My initial thoughts that “I won’t win this contest” was reinforced even more.

That moment, I told myself “April, let’s just see where this takes you. Even if you don’t win, that would be fine. Nothing would be taken away from you, anyway!”

So, what happened next? What did you do during the competition?

During the contest proper, I tried so hard not to glance towards my opponents because I might get distracted. I have a tendency to compare my works with other people. I know I have to unlearn that because it is unhealthy for an aspiring animator like me.

We did traditional drawing, using pen and paper. The challenge during that time was to create our own modern superhero in as little as thirty minutes, including conceptualisation. During the first few minutes, I cannot think of anything so I resorted to recycling my old superhero artworks but that time I made a different style inspiration, something relatable and modern.

While sketching, I realised that I shouldn’t take the competition too seriously so I used the opportunity to have fun as an artist. Hence, I played around. That moment, I was reminded of my sister and her stories of how stressed out she was at work. Then, the idea came flooding in, which also gave me the inspiration to write her name on the artwork.

The result of that sudden realization was a roughly designed superhero so-called “Stress Reliever”. It was a mixed concept of the one I had in mind and previous character designs.

That’s a great idea! How did you find out that you were the winner?

The winners were awarded that same day, but we had to leave the event earlier so we missed the announcement. I received the great news the next morning through a text message and my reaction can be summarized in three progressive phrases “How did I win this?”, “Wow, I won!”, and, “Yehey, I have a new tablet!”

How did this competition encourage you to join more competitions in the future?

I was encouraged because I realized na may pinaglalabanan din pala ako [I have what it takes to compete]. I think it is usual for artists to think that you are not that good enough yet, while the others say so because it feels like other people are better than you are.

What did you learn from this experience of yours?

I have learned to take it easy, and not to hold myself back from opportunities such as this competition. It also encouraged me to take more challenges in the future because I realised that somehow I have what it takes to be an amateur animator.

What can we expect from your career in the future?

Right now, there are a lot of things that I am looking forward to learning. Also, despite the fact that I didn’t pursue biology, I cannot deny that I came to love that field and surprisingly, I was able to apply physiology and anatomy in my designs. I also have plans of pursuing an MA in Physiology but my priority aside from working in the animation industry is to take a masters degree in Animation so I can be competitive on a global scale.