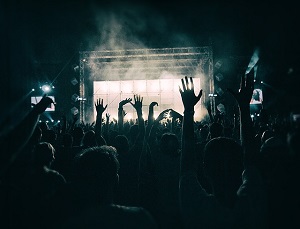 One of the school year’s most anticipated events finally came to a completion last July 22, 2011 at the prestigious Technowave in Tomas Morato where CIIT once again held its annual Acquaintance Party. A time of the year when students can relax, enjoy each others’ company, dance, sing and party the night away. Most of all, it is a time for the students, alumni, faculty and staff to really bond and become one big CIIT family.

As expected, students came to the event dressed to kill in their best suit, tight fitting dress, 3-inch pumps and killer looks for a night of fun and excitement. The event started around 6:30pm with the Doxology performed by Lloyd Lualhati and Angelica Dejan from Highlights, a student organization aimed at promoting spiritual growth. A beautiful and meaningful opening remark by Mr. Robert Peter Ancheta, Head of Academics, followed. Then, the newly elected Student Council officers went on stage to address the entire student body and formally welcomed everyone to the event. The council’s President, Kim Ngo, promised everyone that this years’ party would definitely not disappoint. The introduction of the different student organizations followed as each took their place on stage to be recognized and hopefully entice interested students to sign up. Some organizations also prepared their respective performances at the event and made it a night to remember.

The masters of ceremonies, Christian Rodgriguez and Pamela Gonzales introduced CosmoGroove, CIIT’s very own dance club as they delivered a powerful number that had everything from comedy, B-boy moves, sexy bumping and grinding all the way to a surprise performance by Mr. Conrad Maraan from the IT Dept. The activities and fun parlor games made things interesting and kept the students’ attention on stage. “We selected these games with the aim of really giving the students and faculty a chance to bond and get to know one another while interacting in a fun way. We chose activities that would really be enjoyable for the contestants but at the same time be equally entertaining for the audience”, says Kim. Pinoy Henyo paired up various faculty and staff with students that resulted in a hilarious and comedic display of miscommunication between contestants. Though not a single pair took home the cash prize for guessing the correct answer, the entire crowd ended up laughing their hearts out. Dubbed as the favorite game of the SC President, the Break-the-Egg game paired up numerous students who had eggs dangling from their tummies down to their legs and had to sway their hips in an attempt to break the eggs by hitting the eggs against each other. Campus hottie Sarah Benitez along with freshman John Carl Magat won 100 pesos each as one of the three winning pairs.

Dinner was eventually served to the throng of hungry students who had their issues regarding undercooked rice and non-refillable drinks. The third game, a twist on the classic bingo game, required students to mingle around and search for people who fit the descriptions stated in the Bingo sheet and have them sign. Then, the names of the winners of the Bingo game, Alexander Tantoco and Benjamin Rubio, were announced.J-Marc Mendoza and Stefanell Santos kept students entertained as they sang acoustic, ballad and rock songs. Faculty and staff also took the stage with Ms. Kai from the BDD and Prof. X singing their version of”Need You Now”. Raffle draws in between performances kept the students excited because of the P1,000 grand prize that awaited them. Student bands “Hubad Na Katotohanan” rocked the night with “A Thousand Miles” by Vanessa Carlton and “Two Trick Pony” by OPM band, Sandwich. Our very own Cha Lopez also sang “Baby Now That I Found You” and was then joined on stage by Council Vice President, RJ Samson, which got the entire crowd screaming and cheering. “6 Spaced Cake” dropped jaws as their bassist, Juancho,surprised the crowd by playing spectacular bass while bumping, grinding, and waving his hands to get the crowd going. They gave an energetic performance by playing Huling El Bimbo and Kung Ayaw mo Wag mo. Ms. Aventino surprised the students by singing Stay as the last performance on stage which was perhaps the most cheered song number of the evening. The event officially ended with Council President Kim Ngo and VP, RJ Samson, coming to the stage and expressing their gratitude and appreciation to all the students who supported the event and helped turn it into a huge success. As a finale, the entire CIIT family was called onstage for one last group shot.

THE EVENING IN PICTURES

A beautiful and very meaningful opening remarks delivered by Mr. Robert Peter Ancheta, Head of Academics Department, stressing on the importance of the evening in creating and strengthening bonds among students, staff and faculty in becoming one big CIIT family.

Months of preparation for the Student Council’s first major event of the school finally comes to fruition as Council President, Kim Ngo, delivers his speech to officially kick-start the event.

The infamous student group Zero Productions making their presence felt once again by creating the video teaser for the party played through the campus TV and during the event.

CosmoJournalism Org takes the stage to begin their coverage of the first major event of the school year. The Acquaintance Party is expected to make the headlines of their very first newsletter issue.

CosmoGroove Dance Org steps up and gets recognized. This org is surely one complex mixture of talents and dance styles.

IT Dept Head, Sir Conrad, jumps on stage and provides one of the most unforgettable moments of the evening as he joins CosmoGroove and busts his own moves.

Big man Juancho drops jaws as he strums the bass guitar to the amazement and surprise of everyone. His band, “6 Space Cake”, performs a few songs with Juancho showing his belly-grinding moves and calls everyone to raise their hands and wave!

English professor Ms. Angeline Aventino, gives in to students’ clamor as she sings to the acoustic tunes of Lisa Loeb in the evenings’ most cheered performance.

Finally a chance to take some pictures of the students over dinner.

Second year I.T. students waiting for their turn on the buffet table.

Wacky times as students unwind just before the mid-terms exams.

Freshies join the fun as this group poses just before joining the long buffet ques.

Second year students with select alumni attends the event and reunites for this after-party shot before heading off to their Friday night gimik destinations.

CIIT faculty and staff in support of the Student Council effort, renders two song numbers, one solo dance performance and participation in some of the contests.

Some pictures of the close to 200 students who attended the acquaintance party and stayed until the evening!

The files here are compilations of photos taken by various CIIT students and staff. The image files are separated into three .RAR files that are password protected to avoid non-CIIT staff or students access. The video coverage of CosmoGroove’s performance is a four-part video compressed into one .RAR file.

The password for all RAR files is the answer to this question:
What is the nickname of our Student Council President?