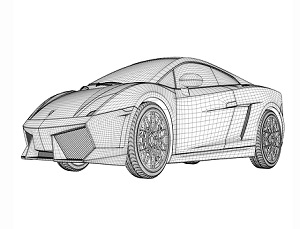 Noyelle is a 19-year old freshman student in CIIT studying 3D Animation. He’s not exactly a genius in Math nor great in Science. He is however a self-confessed gaming addict constantly dreaming and fantasizing of how to one day, bring his passion for gaming, into something closer to reality. As an artist, it’s not exactly easy to find a school and place for you to hone such skills and after jumping from two colleges which left him greatly unsatisfied, he’s proven just that. On the third try however, he finally found home in CIIT. Just months into the 3D Animation Specialist Program under the guidance of some of the country’s best 3D Animators, he finally created his first masterpiece in the form of this jaw-dropping video!

In the midst of the excitement and awe, we managed to chat with Noyelle and share what he had to say as a young Filipino 3D artist.

What inspired you to come up your own 3D model of a Lamborghini and transform that into a robot?

Hmm, let’s just say that I really love cars. Those cars that you don’t usually see in the streets and I’m also a big fan of movies with realist 3D visual effects like transformers. That inspires me a lot specially when working with 3d stuff.

What influenced you to start studying 3D animation in CIIT?

Here we go. The truth is before I got myself into 3D, around 2006-2009, I was just a gamer – a real hardcore gamer, haha! I usually spend lots of time playing computer games (RPG and MMORPG). Eight to ten hours of play is just the minimum per day for me. If I’m not mistaken there a was a time that I played straight for 20 hours, haha,and that’s what you call an addiction! Of course you are not going to get good grades in your academics with that kind of a routine. Come on, you know what I mean, haha!

I’m not denying it. I’ve been addicted to games for more than 3 years and actually proud of it. Cause for me playing computer games really contributed a lot of exposure in computer graphics – really cool computer graphic effects! While I was playing games back then, I started using Photoshop and After Effects to post some videos in forums. I also started making videos of my character killing and owning enemies. It might sound stupid but it’s the truth so what can I do? (Laughs)

I’m just a simple person who just wants to live and enjoy his life by doing things that I like most and not just doing things just for the money. Anyway I know graphics loves me and I also love it so that’s why I’m here now making 3D stuff and maybe in the future, with realistic visual effects.

What can you tell about the new knowledge you gained after taking 3D classes in CIIT?

Having 3D classes in CIIT really helps me strengthen my knowledge about the basics and on how to do it the “proper way”. Unlike back then, I really was just surfing online and learning bits and pieces on my own which was very hard to do and time consuming.

What’s the most fun part in studying 3D for you?

Do you think this would be a good career to enter and do you think Filipinos could compete with other countries in the 3D Animation Industry?

Yes! But of course if you want to be good at something, you gotta’ really invest some time for it. As long as you know how to move your hands, turn your head upside down, you know how to walk and run and the most important of all is you know how to recreate things around you.

What are the most important things you should remember to make a great 3D model?

Before I begin, Iusually check the blue prints/reference images or the concept first before rolling out. It’s good to check those things first because sometimes blueprints have some problems particularly in details. If you get into that situation, do rely on your best judgment. Of course you really have to invest some time. Don’t force to finish the model (ng isang pasada lang) give yourself a break if needed. Having a break is really good especially when you’re stuck. Lastly, you’ve got to be patient. Just take it easy and get some good energetic songs to keep you thinking and help you focus.

How long does it usually take you to create a 3D model?

For me it depends on how detailed you want the model to be. And of course it also depends on the machine that your’re gonna’ use! Around 3-5 days is enough for a normal detailed model. One week is the maximum for a fully detailed high poly model.

What advice do you have for young aspiring 3D artist who have ambitions of studying breaking into 3D and dream of doing what you are doing now?

Just always believe in yourself. I was a gaming addict for 3 years and although it was a stupid thing to do, I just decided to do something about it. It’s something I really love and have a lot of fun with and now I can definitely see myself achieving something great like this.

What can we expect from you in the future seeing as you’re only in first year at CIIT?

I did put a sneak preview on the next car I am working on at the end of the video and see what crazy idea I can think of to do with that. It’s also a favorite car of mine – the Veyron. I definitely look forward to including textures to my work and really taking it a step closer to the Transformers. IT would be something that would really make me happy.