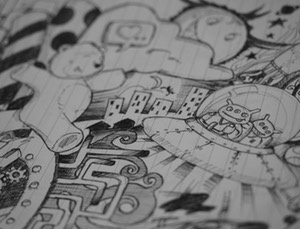 If you think doodling is a non-sense activity, well you better think again. Today, more than a simple “work of art” or an arty vandal on the wall, drawings and scribbles are now among the Philippine’s key economic contributors.In 2011 alone, the country’s animation industry generated total revenue of 128 million USD or about 5.3 billion pesos.

Animation as an industry in the Philippines was never a serious career path for Filipinos especially in the past. Just like how cartoons were associated with kids, animation courses were thought as petty degree programs that were only destined for hobbyists.While math and science wizards were considered “geniuses,” illustrators and cartoonists were often referred to as “weirdos.”

But those are now just things of the past. With the rise of technology and the Internet, Philippine animation has now found its way as one of the most lucrative careers in the country.

The Rise of Filipino Animators

Did you know that a Filipino was among the set designers of Pixar’s most notably award-winning film Finding Nemo and the brains behind the Monster’s University’s library? Yes, Nelson Bohol, a Filipino-American Pixar artist, was among the many talented designers of a number of cartoon shows and animated films in the U.S.

According to Benjamin Marasigan, president of the Animation Council of the Philippines Inc. (ACPI), the country plays a vital role in supplying a significant share of animated content globally. Filipinos’ innate artistic skills and passion for the arts have empowered foreign clients to continuously work with local artists. Their sense of humor and familiarity with western culture both captured some of the world’s leading animation studios. These include Walt Disney, Warner Brothers, Hanna-Barbera, Marvel Comics, and Cartoon Network.

For the past few years, animation emerged as one of the most flourishing industries in the country. Besides producing total revenue of $128 million in 2011, Michael Kho Lim, executive director of ACPI explains that the animation sector will continue to boost in the coming years. He also added that the appreciation of Philippine peso will attract a lot of foreign companies to outsource operations in the country. This was apparent in 2012 when the animation sector posted a 3 percent growth generating $132 million worth of revenue.

As the growth in the animation sector become seven stronger, competition among other countries including China, India, and Korea has also become fiercer. Thus, Filipino animators are expected to relentlessly improve their skills to surpass global competition.

One of the best ways to improve creativity is to continue learning. Reading and researching about the latest trends in animation are strategic ways to hone one’s innate artistic talent.

The world of animation can be both exciting and complex.Apart from conveying significant information, animators should also convey vivid imagination to create visually compelling projects. It is for this that multimedia schools can play a vital role in providing students relevant skills in animation.

CIIT College of Arts and Technology is one of the most sought-after animation schools in the Philippines. Besides providing high-quality education, it also endeavors to provide industry-based and comprehensive learning that can groom students to the real demands of the workforce.

Now a full-pledged educational institution, CIIT caters to both promising undergraduates and corporate clients needing quality yet affordable training in multimedia arts and IT.

For additional information about their existing courses, visit ciit-ph.com.